So I enjoyed giving my Teleplace talk on Quantum Computing on Satuday, and I received quite a lot of feedback about it (mostly good!).

My talk was reported on Slashdot via a Next Big Future writeup, which in turn linked to Giulio’s Teleplace blog! This level of coverage for a talk has been very interesting, I’ve never had anything linked from /. before. They unfortunately got my NAME WRONG which was most irritating. Although I’m fairly impressed now that if you Google for ‘my name spelt incorrectly + quantum computing’, it does actually ask if you meant ‘my name spelt correctly + quantum computing’ which is a small but not insignificant victory 🙂 Note: I’m not actually going to write out my name spelt incorrectly out here, as it would diminish the SNR!!

The talk also prompted this guest post written by Matt Swayne on the Quantum Bayesian Networks blog. Matt was present at the talk.

I’ve had a lot of people asking if I will post the slides online. Well here they are:

Here are a couple of screenshots from the talk: 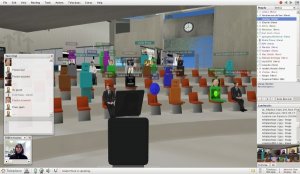