Cool. I love steampunk stuff. Especially as quite a lot of the random junk equipment in my lab looks vaguely like it could belong in this genre. So here’s an exhibition you can go and see in Oxford:

Tech Know: Fast forward to the past

“The growing number of artists and amateurs who have built steampunk devices has led the Oxford Museum of the History of Science to mount an exhibition of them. The show runs until February 2010.

Here are some more Pretty pictures

There’s also a blog:
Steampunk Art @ Oxford, The Museum of the History of Science, Oxford University

In case anyone noticed the blog-tumbleweed accumulation, I should explain where I’ve been: I spent the last 3 weeks in Vancouver at D-Wave hanging out with those awesome pioneers of adiabatic quantum optimization.

I love working with these guys, they are really good at what they do. Thanks go to all the guys there for making my trip very enjoyable. I played with the latest quantum processors, which gives me a total buzz. I did more Physics than I think I’ve done in months, musing over the Hamiltonians of Ising spin systems and whatnot. The processor technology is really coming along now, as I mentioned a few posts ago.. I totally want a quantum computer for Christmas. Superconducting flux qubits FTW!

Vancouver was cool too. I ate more sushi than I probably should have done. There was lots of rain, but then again I don’t mind the rain, especially when there are accompanying storms. I like Vancouver and the West coast in general as all the people there are so enthusiastic. It beats the perpetually miserable British folks 😉

So although I have been neglecting to post over the last 3 weeks, lament not this absence. There has been tons of cool Physics, lots of fun, and… did I mention… cake. They MADE ME CAKE. Not only can these guys engineer the most advanced superconducting processors in the world, but they also make a mean chocolate cake. Respect. So we had a coffee, cake and donut party 🙂 I had to honour that on here of course. 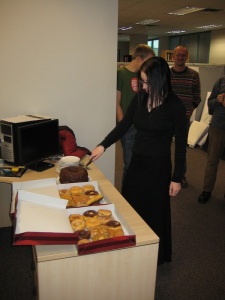 Where there are quantum computers, let there also forever be cake…

I’m feeling in an artsey mood pending the release of my ART BOOK <- Yes that is a shameless plug. So I got thinking about what our brain actually does when we try to draw things.

Specifically, why is drawing lifelife objects difficult, especially from memory?

I like to draw, and I often come across people who say “I wish I had that talent/skill”. I personally don’t believe it is an instrinsic talent, I think that anyone can learn to draw with the appropriate tuition. For the most part it involves following a fairly simple set of rules. Deciding what to draw is the ‘creative’ part 🙂 When I was originally interested in drawing, I was told by teachers to always ‘draw what you see’. This is an interesting statement, as what we see and how we interpret the information are two very different things.

Try to draw a face without looking at a reference. You’ll get it wrong. I suspect there are only a handful of people that can draw realistic faces without a reference (or without some rule of thumb/mathematically based guidelines). I personally tried to perfect this skill for years, before I actually realised that it was damn near impossible. And it wasn’t a lack of general artistic ‘skill’ – I could draw almost perfectly from a reference.

The problems associated with drawing from memory are to do with our hard-wired vision processing architecture. Our brain interprets data by using heavy compression algorithms. Lines are built up into shapes, shapes into blocks of shapes commonly found together, and these blocks of shapes along with colour information form concepts. Each level of complexity is recognised at a different level in the cortical hieracy, and each level is a compressed version of concepts from the previous one. In other words, our brain works by vector image processing.

So when we hold an ‘idea’ of a picture in our mind, it actually looks nothing like the real-world version. It is very interesting to watch children try to draw – they construct everything out of lines and basic shapes, because this is how the concepts of those objects are stored in the brain.

So how can we break this instinctive behaviour in a bid to become more artistically fluent?

I think that it requires turning off your instinctive mind’s-eye view of an object. There are several ‘tips’ that one can follow to attempt to bypass the brain’s heavy image processing. Most of these are things that each artist personally rediscovers by trial and error over many years.

1.) Draw based on tonality, not shape.
If you see an area of shadow, shade in this region. Try to view the subject as blocks of colour, light and dark areas, not as a predefined ‘object’ such as a bowl of fruit or a face.

2.) Never draw lines!
Lines hardly ever exist in real life. They are created by your brain as a way of compressing information about a step change in brightness, saturation or colour between two areas. If you simply must draw lines, draw them faintly and then come back to it later and match the tone of the line with a filled (crosshatched/shaded, whatever) area on one side.

3.) Turn the reference image upside down.
This technique works amazingly well. Your immediately kill some of the recognition pathways of the brain just by inverting the object. Your brain doesn’t store patterns (concepts) like ‘an upside down horse’ because we don’t often see upside down horses.

4.) Use a ‘window’ referencing technique
Cut a window out of a piece of paper and draw from the reference only what you see through the window (works best with a printed reference image)

5.) Flip the image
If you are working digitally, flip (mirror about x co-ordinate) both your image and the reference image quite often. You often spot mistakes immediately, and this prevents you from becoming ‘accustomed’ to any major errors in perspective/anatomy etc in your piece. You can do the same thing non-digitally as a check if the image is on a single side of paper – by holding it up to the light or using a lightbox. (You can’t edit the other side though, this is a read-only technique!). Interestingly this method works in somewhat of an opposite way to 3.) because the flipped image is (usually) still consistent with reality, therefore you actually use your brain’s ability to pattern match to spot the inconsistencies very quickly, as opposed to reducing the pattern matching it is able to perform by making the image non-realistic.

6.) Observe the image from a greater distance
This allows you to spot certain compositional errors without your brain automatically finding the focal point of the image and ‘ignoring’ the rest, as it does if you are close enough to see the detail.

I guess the GOLDEN rule is to always use references where possible. I had an issue with this for many years as it seemed like ‘cheating’. It’s not cheating, it’s just that our internal references don’t look anything like reality, so if you want to draw something realistically, don’t rely on your brain! (In fact save it for the creative part).

Out of interest my book is now available on Amazon. N.B: This first publication run is IN SPANISH. For translations of the writings accompanying the artwork, you’ll have to visit my website until I get the English version released. The prices and availability also seems to have screwed up a bit. I think these are just teething troubles. I’ll probably put a dedicated post about it when everything has actually been sorted out properly 😀