Links to check out over a coffee.

LHC setback
If you haven’t heard (where have you been living?) the LHC has been setback due to the technical failure / magnet quench. I really hope that this is the only major problem and that they get back onto track soon.

Sciencewoman has put together a list of women bloggers in the science and engineering fields. A valiant effort given the current blog explosion!

New fractal pattern found in milk and coffee
Mmmm, coffee.
Loophole found in quantum cryptography photon detectors
It seems that the detector of popular choice (the Perkin Elmer SPCM-AQR detector module) used in current systems has a flaw. I wonder if this is an engineering problem (i.e. more secure detectors can be developed) or if there is something more fundamental here.

Play with spider! – I love this. Play with a realistic 3D spider, which interacts with your cursor. A great flash applet – especially those who wish to overcome arachnophobia. You can change the properties of the spider e.g. the length of the legs, speed of movement etc.

Just how much fun can you have with a bunch of sand grains and a speaker? About this much! Almost trumps my previous longstanding favourite – Crazy fun with non Newtonian fluids.

I am saddened to hear about the death of Brian Pippard. Pippard made pioneering studies into the field of superconductivity at the University of Cambridge, including foundations for the BCS theory, and the introduction of the coherence length and the non-local model. He demonstrated real insight in both experiment and theory. See here for an obituary.

Part of the reason I started this blog was to disseminate information about what experimental physicists actually do in the lab on a day-to-day basis, and why these things are interesting. The posts should be accessible to a wide audience. Here’s the first one…

I spent some of last week playing with a NO thermometer. This consists of a radioactive source crystal, here a single crystal of Co with 60-Co impurities, which is mounted (in our case) on the low temerature stage of the dilution refrigerator. The 60-Co decays to the stable isotope 60-Ni via beta decay and the emission of two gamma rays at 1.17 and 1.33 MeV. The gamma rays can be detected by (for example) an NaI scintillation detector.

What does this have to do with temperature? Whilst the decay itself is temperature independent (you can’t define the temperature of a nucleus!) the gamma rays are emitted in a specific direction – along the spin axis of the nucleus. As the temperature decreases, the 60-Co nuclei become polarized (their spin directions align, or more accurately they are no longer misaligned by thermal fluctuations), and the spatial distribution of emission develops nodes along one crystal axis direction (see sketch below). So point your detector along this axis and you can watch the counts fall to zero as you lower the temperature.

Here is a picture of the detector setup. The source is in the cardboard box, and the software displays the energy spectrum of detected particles. (You can see the Compton scattering continuum and the two gamma peaks to the right). 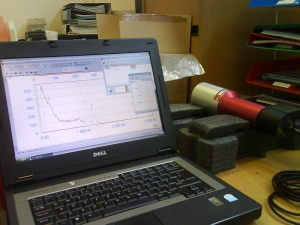 To calculate the temperature you take the ratio of the integral under the peaks at high temperature to that at low temperature. The NO is an absolute temperature reference, i.e. you calibrate it from comparison with the theoretical prediction for the decay rate.

The thermometer only really works below 100mK, above this temperature nearly all of the nuclei are randomized. It works best in the range ~5-50mK.

The NO is usually removed in normal operation, as the radiation can cause a slight heating of the sample. It is used to check the base temperature of the fridge and to calibrate other (nearby) thermometers. At the moment there are 7 thermometers in total on our big dilution fridge – 4 of them are on the mixing chamber where the sample sits. We’ll see if it works 🙂

FLUXONICS is a european framework dedicated to furthering research into superconducting electronics and digital circuits. Within this framework is the S-Pulse project, which I am currently involved in. As part of this project, I recently visited the FLUXONICS foundry for superconducting electronics at IPHT, Jena for a Technology training workshop.

There are several institutions involved in the project, and it was interesting to meet people from all over Europe who share a similar interest in this technology:

It was a good workshop, with a thorough introduction to RSFQ and the state of superconducting electronics in Europe. The foundry has a stable 1 kA/cm2 Nb/Al-AlOx/Nb process certified with ISO-9001 standard. It is nice to see this activity in Europe, given that the other two major superconducting electronics foundries are based in America (HYPRES) and Japan (ISTEC). It will be interesting to see how the European RSFQ / Josephson technology improves over the next couple of years, and to keep track of the research performed with chips fabricated using the IPHT Niobium process.

I just finished reading ‘The fabric of reality’ by David Deutsch. It is a very thought provoking and impressive book. The book argues that the (current) reductionist approach to understanding modern physics and the universe is, although useful to a certain extent, unable to explain certain higher level emergent phenomena. The book ties together the four ideas of computational theory, quantum theory, the theory of evolution and the theory of knowledge in a rather persuasive way. Delightful insights tie the four main concepts together, giving an exciting glimpse of what could be a very aesthetic theory of everything.

I must admit that I found the chapter with the crypto-inductivist conversation a little difficult to follow, probably due to my lack of knowledge of the field of epistomology (no pun intended). However I very much enjoyed the chapters on ‘Time: the first quantum concept’ and ‘Time travel’.

Deutsch provides a very accessible and convincing overview of the many-worlds interpretation of quantum mechanics This has perhaps somewhat converted my own views on the subject; I never much liked the many worlds approach before reading this book. However when you take into account the role of time and lose the idea of worlds ‘splitting’ – (they don’t ‘split’, they just exist) then it makes a lot of sense.

The book also discusses ‘Omega point theory’ – a theory of events leading up to the big crunch, which was interesting as I hadn’t heard of the theory before.

It was fairly predictable that I’d like this book, as it discusses the intersection of quantum physics and the theory of computation, of which I am rather interested. Throw in the role of intelligence and knowledge in such a unified theory and you’ve pretty much got me hooked 🙂

The book was first published in 1997 (I don’t read books in any particular date order) so it’s certainly not new – hence I’ll definitely be doing some ‘further reading’ in ths area. I’m looking forward to the next book, which I think is scheduled for release in 2009.

New arrival in the lab!

Our new dilution refrigerator from ICEOxford. We’re currently installing extra thermometry to prepare for the first run. It should reach base of ~12mK. So I thought, as usual, artsey pictures were necessary.

So I spent last week hanging out at D-Wave systems which was awesome. For anyone not in the know, they are (to the best of my knowledge) the only company pursuing the ambitious goal of building a large scale quantum computer.

Their architecture consists of superconducting flux qubits implemented in the framework of Adiabatic Quantum Computing (AQC). Most people think of the gate model when they envisage quantum computing, which consists of applying unitary evolution operators (rotations in the Bloch sphere) to single qubits and to entangled states of multiple qubits. AQC works a little differently, by slowly evolving the Hamiltonian of the system (slow in order to keep it in the ground state) from an initial Hamiltonian (where the ground state is easily prepared) to one where the ground state would encode the solution to a hard problem.

To compare, the gate model involves moving between states, and taking the system to higher energy levels. Remaining in the ground state means that you are always protected from sources of decoherence (i.e. nearby states) by an energy gap, which is a minimum at the point where the energies of the two Hamiltonians would classically intersect. However at this point the quantum mechanical explanation predicts an anticrossing of these states, and thus the appearance of the energy gap (hope I got that correct). I’m from an experimental gate model background, be kind 😀

They really are a unique company, and their experimental effort was impressive. (Of course so too was the theoretical side, but coming from an experimental background I could relate more to the cool kit and the data). I met some really fantastic people whilst I was there. Not to mention the fact that Vancouver is one of the most beautiful cities I have visited. Combine immense yet aesthetically pleasing skyscrapers, modern city living, a picturesque harbour with a mountain range backdrop, stunning forests and parks, beaches, amazing coffee, numerous outdoor sports opportunities and more seafood restaurants than you could possibly dream of, and the picture begins to take shape. They also have nutella ice-cream… Just thought I’d mention that.

To check out more about the company, you can read Geordie’s blog (he’s the CTO of D-Wave and a really cool guy) or visit the company link above.

Some recent papers can be found here, here and here.

Hopefully I’ll be able to report more on this topic in the future!